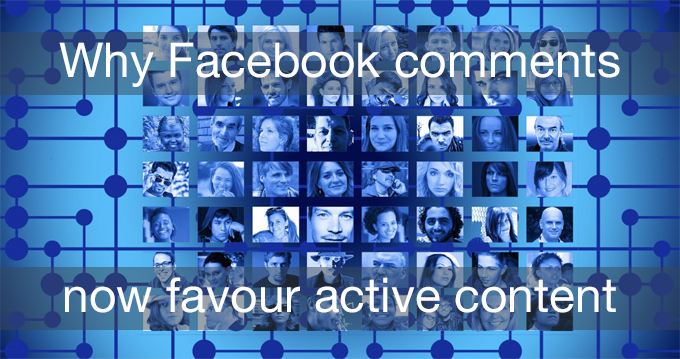 A lot of people are moaning about the recent changes in Facebook comments.

Whereas I see this as excellent news! These changes are extremely welcome as far as I’m concerned.

Mark Zuckerberg is changing Facebook’s algorithm to dampen down on passive content. In turn it will favour more more active content in the form of Facebook comments. This means ‘publishers’ (not necessarily bloggers) will find their ‘pushed’ posts or articles failing to get the traction they once had.

Passive content is placing posts in front of a lot of people with the hope that some of them might read it. Clever copywriters ploy their skills to force a reaction to get the post read.

Usually this is achieved via the headline and the first paragraph.  Various trigger techniques are employed to attract attention and persuade readers to respond favourably.

Contributing to the conversation

However, active content writers seek out their audiences to have conversations with them. They join existing discussions by showing an interest in the other participants.

The reason is two fold, both helping the writer as well as the prospective reader:

It’s important you know what your readers are interested in before you offer them an example of your writing. Understanding the conversation allows you to provide relevant and helpful content that can make a real difference to their lives. This in turn is much more likely to be read and ultimately shared.

Mark Zuckerberg was concerned that his original purpose for Facebook was being undermined. I gather it was to create communities, connect friends and families and encourage conversations online.

However, digital businesses had other ideas. They saw this as inexpensive opportunity to get in front of a lot of people to passively push their content to get it ‘seen’.

Now the algorithms prioritise ‘meaningful’ content by making Facebook comments more prominent. This is an attempt to spur more engagement between Facebook ‘friends’ once more through proper conversations.

What are proper conversations?

Commenting has gone into a severe decline, certainly since 2014. And this is not just on blogs, but on all forms of social networking.

Some eminent digital influencers are damning comments as being ‘dead’. Certainly the rise in spam and similar activities have contributed towards this, especially where there is no or little moderation. Unfiltered comments can be seen as ‘dangerous’ and are best avoided.

This freedom has enhanced the realities of ‘free speech’, and a culture of hate and trolls aggravates the situation. None of this is constructive towards ‘meaningful’ conversation.

But I also think it is the rise of mobile devices activated with dexterous thumbs. These contain platforms that offer ‘quick fire’ communications that are short lived with the minimum of effort.

Conversations ping-pong to and fro with little content. Many threads consist of sparsely worded answers. None of these can be developed into something ‘meaningful’ or worth reading.

Whereas the new algorithms have been programmed to encourage longer Facebook comments. Mark Zuckerberg considers longevity as the key when it comes to spurring engagement.

To me this is totally correct. Facebook is forcing people back into the old, better ways of commenting. Proper conversations taking place between recipients. Engagement can only thrive if something commendable and relevant is communicated which benefits all parties concerned.

Back in the good ol’ days, comments were seen as a measure of relevancy. Emphasis was placed on content that lead to a lively discussion. Even now search engine algorithms are programmed to notice ‘popular’ blogs that have many comments. To them this defines the blog must consist of suitably indexable content to attract such attention.

And certainly these popular blogs with the most comments can be deemed to be ‘trending’. This phenomenon continues with posts going ‘viral’ within social media. There must be something relevant that ticks all the boxes for this content to receive such treatment.

As a result, Facebook is capitalising upon this by encouraging Facebook comments to become longer. This makes them more engaging as they contain relevant content people actually want to read.

Putting the social back into networking

Some people would say it never left. But I disagree. Being social is about proper communication and engagement, something Mark Zuckerburg wants to resurrect.

Passively feeding content from blogs onto pages or groups without being present to talk to potential readers is not being sociable.

Placing content that is irrelevant or unworthy that begs for attention and intrudes into other people’s space is also being unsociable.

Spamming or trolling activities that irritate or upset people is definitely not sociable.

Encouraging longer Facebook comments with ‘meaningful’ conversations that others can join in or develop relationships is not only sociable, but a very good thing.

People have forgotten that the Internet was built around comments. The main difference between blogs and websites is that the former allowed people to comment on them. This allowed blogs to create readership communities by developing a sense of belonging.

Reddit also has a flourishing commenting system. This is partly because it is moderated by humans and not left to chance as with other social networking sites. Its voting system enables its users to push relevant, helpful and constructive content to the top to become more visible.

Facebook also hopes to recapture its communities through enforcing longer Facebook comments. In particular comments that are well written, spark discussion, and welcomes anyone who wants to join in.

So how do we write longer comments?

If you are a regular reader of this blog, you will know I advocate the return of commenting on blogs. But there is no reason why commenting cannot also thrive within social media.

All that is needed is a change in mindset. A focus on being less lazy and a desire to be more proactive in writing longer comments.

Yes, I know we live in a time-poor world. But nothing is ever gained through only clicking the ‘like’ button. Now’s the time to pull your finger out and start thinking carefully about any comments you write, on blogs, Facebook or anywhere else.

And if you need any help in writing more substantial comments, give my Commenting Mastery Challenge a try. It will guide you towards becoming a much better commenter.

What do you think of the new style Facebook comments?

Let me know through my comment box below what you think about longer Facebook comments – I’m sure my other readers would also be delighted to read what you have to say.

Check out these other awesome posts:

8 tips on how to connect with your blog readers

Example of a barrier to commenting on blogs

How commenting can transform your blog’s performance

How commenting helps with SEO for your blog

Some facts about leaving comments on blogs you need to know

Are you lucky enough to know who your loyal commenters are?

10 reasons why your blog is suffering from commenting failure

Please let us know what you thought about this post: