The negative impact of social media in 2019 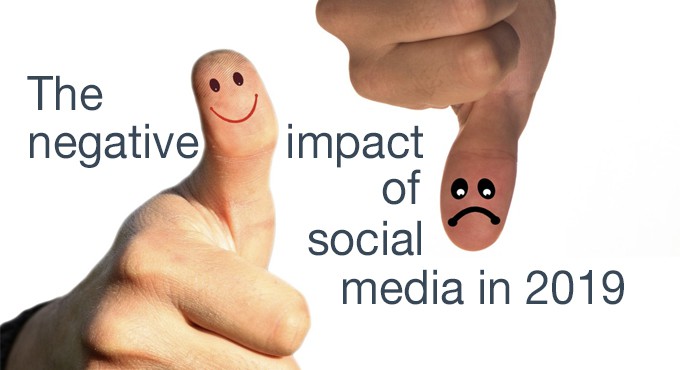 Every useful tool can have a negative impact with physical and mental repercussions.

Social media, as one of the most recent communication technologies, has no exceptions. This article discusses the side effects of using social networks.

Influencers on every kind of social media can make you feel a failure when achieving unreasonable expectations.

Many young boys and girls are exposed to an endless stream of luxurious life images. These images are unrealistic and certainly unachievable as goals. However, many people cannot distinguish fantasies from real life, so consequently face many unfulfilled hopes.

For instance, Instagram celebrities release beautiful pictures and videos whilst wearing astronomically expensive clothes, watches and shoes. Well-shaped men and women seduce their users to follow their sort-after lifestyle. These influencers entice people to buy and use products which suggest they could be perfect like them.

The answer is to stop believing these social media pages, especially those that run adverts.

Negative impact of being forgotten

The wild competition of absorbing more and more followers on social networking sites also has a detrimentally negative impact.

There are always people who more beautiful, funnier and more attractive than you. When you use social media, you will face some scary questions. “Why do others have more fun than you?” “Why are these people collecting more likes and comments than you can even imagine?”

Based on socialtradia, even influencers who have reached the top intend to sell their pages. This is because they cannot stand being forgotten by their followers.

As a general rule of thumb, we suggest no more than half an hour usage of social media each day. Spending too much time on social media can be really harmful to your mood.

Along with stress and depression, being too long on social media definitely causes insomnia. Many people have confessed that increased use of social media has harmed their sleep patterns.

This is due to the increased impact of blue light from screens affecting your brain waves. Especially if you go online first thing in the morning and last thing at night.

It’s important to be aware of the amount of time you spend on social media. If you cannot control your usage, you certainly need to find a solution as quickly as possible.

“Internet Addiction” is approximately a 30-year-old phenomenon. Excessively using the Internet, especially on social networking sites, is a psychological context which is now regarded as a medical disorder.

Social media can be more addictive than cigarettes or alcohol. Facebook was once the most addictive site, but now Instagram is considered to have taken over.

Find out whether you are addicted to social media by recording how long you are connected to it over a 24 hour period.

There are some simple tips to alleviate the suffering caused by social media. For example, doing physical exercise instead would be very helpful to your general health.

In this article we explored the negative impact of social media and answered how and why it can hurt you.

We have learned how it can change our view of life, and unfortunately not always for the better. So be careful when you use it and remember overuse can be detrimental to your health.

Has social media had a negative impact on you? Let us know all about it in the comments below.

Why Magento is best for eCommerce SEO

Role of AI chatbots: how does it work?

3 ways to reduce your bounce rate

Freelance blogging work dried up? 5 quick steps to get back in business

Popular
Recent
How to take away the comment boxes from your blog’s pages 42 comments
What stops people from commenting on blogs? 17 comments
20 ways how to get more comments on your blog 17 comments
What is the difference between blogging and micro-blogging? 14 comments
How moving house is like writing a blog 14 comments
How commenting can transform your blog’s performance 14 comments
com versus org: which WordPress to use 13 comments
Why you should blog instead of clean your house 12 comments
Hanging out with your target market! 12 comments
When is a comment not a comment? 11 comments
Why Magento is best for eCommerce SEO 29 November 2021
6 effective web design tips to boost affiliate sales for your blog 18 November 2021
Role of AI chatbots: how does it work? 11 October 2021
3 ways to reduce your bounce rate 8 October 2021
Freelance blogging work dried up? 5 quick steps to get back in business 17 September 2021
Top online money saving tools for savvy shoppers 16 September 2021
5 best social media apps that will rule 2021 14 September 2021
Importance of branded customer feedback 27 August 2021
How to effectively present digital marketing skills in your resume 12 August 2021
9 strategies for making money online using a blog 21 July 2021